Music, Theater, Film and Other Arts in Silvermine 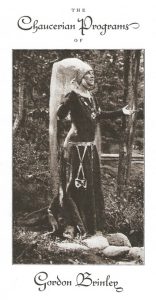 While the visual arts were paramount in Silvermine, music, theater, film, and other arts were well represented as well. Muriel Tindal, an English-born soprano who lived at 306 Silvermine Road, performed supporting roles on Broadway from 1919 to 1921 as well as debuting with the Metropolitan Opera Company in November of 1922. Katherine Sanger (Gordon) Brinley (1878-1966), wife of Daniel Putnam Brinley, was a writer of travel books and literature. Additionally, she took the stage name Gordon Brinley and, in 1921 producing programs of Chaucer poetry around the country in various costumes that she had created. 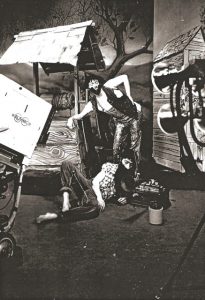 The Silvermine Sillies, which were established in 1925, were an excellent example of the collaboration between writers, theater and the sculptors, painters and other visual artists of the Silvermine arts colony. John Vassos coordinated the Sillies in 1935, and his wife Ruth wrote several of the sketches, including “Nazi Nazi” and “George Washington and the D.A.R.” Other artist participants included: painter Dorothy Byard; Judson La Haye, a musician and the station supervisor of WICC in New Haven, the first radio station in southern Connecticut; and cartoonist Paul Webb and his wife Virginia. The Webbs also wrote a sketch entitled “Maw Gets ‘Em Every Year,” which included the characters Maw, Grammaw and the Hill Billies. This sketch may have been based on his cartoon, The Mountain Boys, which was shown in serial in Esquire Magazine and is considered the predecessor to Li’l Abner, which he developed for cartoonist Al Capp in the early 1930s. The Silvermine Sillies continued through the Depression up until the 1940s, and were used in the first decades to raise significant funds for the Guild. 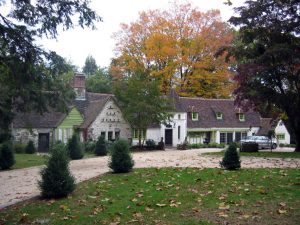 In the late 1930s, Lily Pons purchased the Jay Hyde Barnum estate. Pons, who had made her debut at the Metropolitan Opera in 1931, was one of the principal sopranos in the United States through the 1960s. Soon after she purchased the estate, she had a music studio constructed near the pool. A small chapel was constructed a few yards to the south, where she married Andre Kostelanetz in 1938. Kostelanetz was well-known, one of the first conductors to bridge classical and popular music in the 20th century. For more than a decade the estate was one of the main centers of social life in Silvermine, with numerous parties, concerts and events held there.

One of the more unusual arts developments in Silvermine was the creation of the Theatre in the Woods, near the intersection of Belden Hill and Grist Mill roads. Greek Evans, a baritone and light opera star who sang in various Broadway productions in the 1920s, married Henriette Wakefield, an opera star who sang with the Metropolitan Opera for several seasons. Wakefield owned property to the east of the Silvermine Golf Course that formed a natural amphitheater. Evans built seats in the side of the hill and constructed an orchestra pit. He named it “Theatre in the Woods.” From 1932 to 1937, up to 4,000 persons attended musical and theatrical productions each summer. The theater closed due to Evans’ insistence on bringing in musicians from New York City. The Norwalk musician’s union protested, and Evans had to pay them, even though they didn’t play. In later years, Evans developed the perimeter of the site and former parking areas next to the golf course with Arts and Crafts-style bungalows and houses. 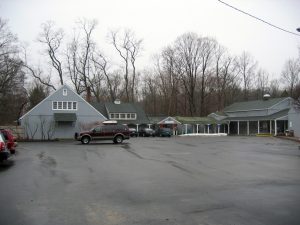 1938 proved to be a watershed year for the Guild in terms of artistic creativity and crossover collaboration. In that year, the Silvermine Music Festival was created, which melded the visual arts with live classical music concerts performed by the New York Philharmonic. The event attracted over 30,000 attendees, and all of the proceeds went toward building a new annex to the barn, which allowed for new classes in drama, dance, music and experimental film. To the north of the original Guild barns, and on the surrounding hillsides, thousands of spectators came to see numerous musical and theatrical performances in the 1930s and 1940s.

From the beginning of the Silvermine Arts Guild, there was a keen interest in the use of art in new media. Robert Flaherty (1884-1951), considered the first full-length documentary filmmaker, showed his film Nanook of the North in Silvermine soon after it was made in 1922. Experimental and independent films were shown, including Fernand Leger’s Charlo Presente le Ballet Mecanique (1930); Jean Cocteau’s Le Sang d’un Poete (Blood of a Poet – 1930); and Abel Gance’s Un GrandAamour de Beethoven (The Life and Loves of Beethoven – 1936). The Silvermine area was also used in numerous films, print and television advertising over the years. 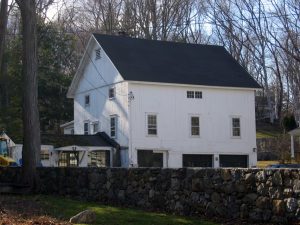 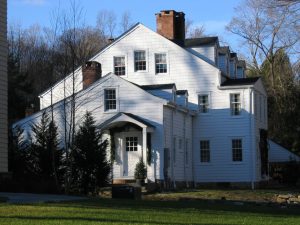 Along with Clifton Meek, who was well-known for his metalwork used in residences in Silvermine, the Gates Moore company, founded in 1950, worked in the industrial arts. Kenneth Gates Moore, a relative of John Kenneth Byard, was a cabinetmaker who began to design reproductions of period lighting fixtures. Gates Moore designed these fixtures for historic museum communities such as Colonial Williamsburg and Old Deerfield Village. He also designed fixtures for the Silvermine Tavern and other period buildings in Silvermine. When Byard died, Gates Moore inherited some of his holdings that were not sold to Francis Whitman, including 5, 7 and 11 River Road. The property, which included the Gates Moore workshop; the Byard house; a barn and a log cabin, was subdivided and sold in 2005, with the exception of the Gates Moore workshop and residence.